We Buy Mt. Washington Vases From Sellers Across The Country

There are not a whole lot of fake examples of Mount Washington glass known to exist.  It is easy to spot completely unauthentic examples that someone tried to forge a Mount Washington mark on.  However, it is more difficult to spot when a generic vase has been “upgraded” with some after market artwork.

The easiest way to spot a fake piece of Mount Washington glass is to just be aware of the shapes and sizes used.  Be familiar with which examples should or shouldn’t be marked.  If you see something that looks like a red flag then ask an expert for further advice.

There are so few reproductions because for decades there was no real financial incentive to take the time to fake something that wasn’t worth a tremendous amount of money.  However, when prices started to escalate that is when the less scrupulous people started to make knockoffs.  Take a look at the image below. 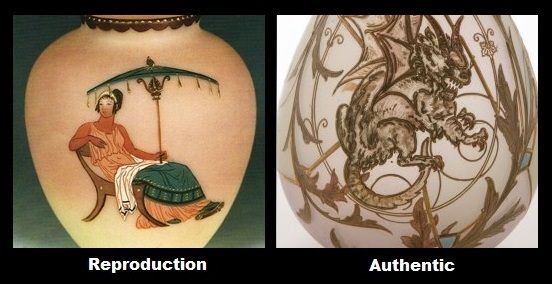 The Mount Washington vase on the left hand side has had artwork added to it.  The art isn’t terrible.  However, there are only about four different colors used and the piece has a cartoonish feel to it.  The real vase on the right hand side has exquisite details.  You can see the details in the feathers and there is lots of shading used to create a 3-D feel.  This example is night and day, but there are some really good fakes out there.

We would strongly encourage you to send us pictures of your Mount Washington glass if you believe it could be fake.  We will respond back quickly with our opinion.