We Buy Mt. Washington Vases From Sellers Across The Country

Early in its history, Mount Washington did produce a line of cameo glass.  Today cameo glass is closely associated with English and French makers.  However, all cameo glass was inspired by classical designs.

When dealing with Mount Washington cameo glass you are only going to see a few colors and a few styles.  The line was not a commercial success.  The pictures below are representative of the colors you will find.  Mount Washington also made some cameo vases and bowls without crimping. 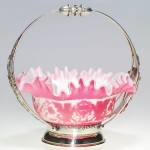 If you need help appraising or valuing your Cameo glass, then please contact us.  We are available by email:  Manning@MtWashingtonGlass.com.